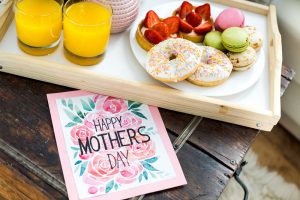 Mother’s Day is a day of good intentions. It’s when children and partners go out of their way to serve Mom breakfast in bed and boxes of precious gifts and a bouquet of flowers. Once Mom is properly spoiled, the kids lead the way to the rest of the home, which looks as clean as one of those homes in Magnolia magazine and smells like lemons and daisies. Then Mom is whisked off to the spa for a day of beauty treatments and pampering. Hours later when she returns home, she’s greeted by an elaborate dinner and a clean kitchen. The table is set for two, and the kids are already asleep in bed.

What, your Mother’s Day doesn’t look like this? Same.

When I think of Mother’s Day, I automatically recall the Mother’s Day of 2009, one of the best Mother’s Day I ever had. It was also the worst. I remember lying in bed and pretending to be asleep while my kids cooked me a secret breakfast. All I wanted was a cup of coffee to help wipe the sleep from my eyes, but it was held hostage by my bickering children who couldn’t agree on who was in charge of what. Meanwhile, my stomach was starting to wake up and I was tired of waiting in bed. As their insults to each other echoed off the stairwell, I couldn’t stop my resentment from building. Every single day, I busted my butt to ensure they had a roof over their heads, food to eat, a ride to school, papers signed, beds made, clean clothes…the list goes on. Every second of our waking lives, I was there to meet their every need, and all I wanted was one day when they would put aside their differences and focus on me for a change. Just one day to thank me for all I do for them, that’s all I expected.

When I couldn’t stand it any longer, I called for them to stop what they were doing and come to my room. Then I laid into them. I told them that Mother’s Day was canceled, including the plans we had to go to the zoo, all because they couldn’t get along.

“Thanks a lot,” my daughter said to her younger brother, then shoved him right in front of me. If I was mad before, I was now an erupting volcano. My eyes practically rolled back in my head as I lost all sense of control. My words became one long and shrill sound that no longer had any meaning at all. And the kids shut their mouths, realizing it was better to just let me howl instead of making it worse with any excuses or blame-shifting. When I was done, I banished them from my room so that I could wallow in my misery.

I was furious that my expectations for the day weren’t met. But more than that, I was left with a sense of disgust at myself for even expecting that this day was supposed to be all about me.

I thought about what Mother’s Day was like when I was a kid. There was the time I made my mom an ashtray in class, even though she had never smoked a cigarette in her life (and I think she still has it). There were the clumsy stories I wrote for her, which always made her laugh. There was breakfast in bed, which my dad made but my sisters and I served. With every Mother’s Day, my mom exclaimed over all our efforts, making us feel like we were the greatest gift givers in all the world, and had absolutely equaled all she did for us in just one morning.

Was my mom moved by the countless crappy gifts I gave her each Mother’s Day, thinking to herself that it was all worth it because I had served her burnt toast and spilled OJ in bed? Not likely. But my eight-year-old self didn’t know any better as my mom raved about the present I had worked on in class, and how breakfast never tasted so good. See, it wasn’t about her, it was about me – her child. Even on Mother’s Day, she was still a mom.

And me in this moment? Not exactly Mom of the Year.

The kids sheepishly entered my room ten minutes after my outburst. Breakfast was placed on my lap, along with a present they both had made. It was wrapped in homemade wrapping paper full of apologies for fighting and ruining Mother’s Day. I apologized back to them for acting like an ogre and a tyrant when we all deserved a good day together. We decided to have a do-over for the day. We laughed over all the pictures and writing on the wrapping paper, shared breakfast, and then got dressed and left for the zoo where we had a fabulous time.

While the day had started on a low note, the rest of the day was one we still love to talk about. But more than that, I never had a bad Mother’s Day again. Did the kids suddenly stop fighting? Did their gifts graduate from classroom art projects to tropical cruises? Hardly. But what did change was my attitude about the holiday. I realized that Mother’s Day really wasn’t about me, but about them. I took a lesson from my own mom and buried my expectations. If I hoped for a specific outcome for the day, I did my part to make sure that happened.

If your past Mother’s Days have been less than stellar, maybe you should also create your own perfect day. That could mean prepping the breakfast the kids “make.” It could be booking your own sitter so you can spend an hour at the nail salon. It could mean planning your own adventure with the kids – a hike in the hills, a day at the beach, a picnic at the park, an afternoon at the zoo – instead of hoping with crossed fingers that your kids or partner will surprise you.

It would be nice to get a day off on Mother’s Day, to be a day when everything goes right and children are perfectly behaved. But is that really what motherhood looks like? No. It’s full of miracles and runny noses, laughter and frustration, praise and disappointment, and triumphs and mistakes. And there are plenty of lessons learned along the way. My lesson was that I’m not being a guiding force when I’m in less control than the kids, and no one wants to serve breakfast in bed to an out-of-control tyrant. Yet, my kids still did. I saved that wrapping paper as a reminder that Mother’s Day is less about perfection, and more about celebrating a bond that helps us move on from bad mornings and still have a really great day.

I hope everyone has a Happy Mother’s Day, even the perfectly imperfect moms like me!

Crissi Langwell is a Petaluma local, blended family mom to three young adults, and author of a bunch of books. Visit her author website at crissilangwell.com.