Is it wrong to encourage your kids to believe in the Easter Bunny ? 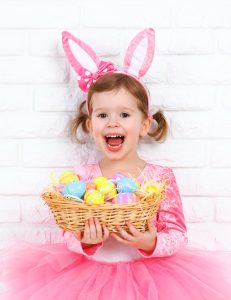 As a kid, my mother made every holiday magical, and I mean that literally. At Christmastime, we’d find a giant footprint in the fireplace and reindeer bells left hanging on the wall. When we lost a tooth, the Tooth Fairy would leave us tiny notes beside shiny quarters, and occasionally a small gift. At Easter, the Easter Bunny would hide baskets full of trinkets and chocolate around the house. If we hurried to the window, we might even see him bouncing away to the next house. As we grew older, my sisters and I fought against disbelief, unwilling for the magic to end. We believed for a ridiculously long time until finally we asked my mom and she revealed the truth.

I wasn’t aware how much effort my mom put into the magic of the holidays until I had kids of my own. I just didn’t have the same kind of natural creativity my mom had when it came to tiny notes, hidden presents, and magical clues about holiday heroes like the Easter Bunny or Santa Claus. More than that, I don’t know if I actually wanted to make up these stories. I grappled with whether it was creating magic around holidays, or just straight up lying. And so, instead of telling my kids about Santa and friends, I kind of skipped that part and just never mentioned them at all.

My grandmother was the one who caught me. “What did Santa Claus get you for Christmas?” she asked my toddler son.

I’ll never forget the look of betrayal she gave me over his head at the audacity that I would deny my kids the magic of Christmas. Then she launched into the story, telling both my children all about Santa Claus, his reindeer, and his home filled with toy-making elves at the North Pole.

It was official: Santa and friends were officially a part of our home. Now I had to figure out how to write really tiny notes for the Tooth Fairy, and how I’d possibly make a boot print in our fireplace when it burned gas and not wood.

My daughter figured out the truth about Santa, the Easter Bunny, and the Tooth Fairy on her own when she was around eight years old. And being a good older sister, she kept her mouth shut as her brother continued to believe. My son, on the other hand, was a diehard believer. We had several huge events that helped further this belief. There was the one Easter when we had stayed at a friend’s house overnight and saw the “Easter Bunny” (a little brown jackrabbit) hopping away from the house and into the vineyards. There was the year that we were driving home on Christmas Eve and Santa’s sleigh (a large white owl) barely missed the top of our car. There was the year that Santa himself (my neighbor from across the street) made a guest appearance in his Santa suit, peered in our windows, and then told us he’d be back later since we were still awake.

My conscience was getting the better of me, though. I hated lying to him. Plus, I was a teeny bit tired of all these imaginary beings getting the credit for my hard work. So I decided that the next time he asked, I would tell him.

My opening came when he was 10, on a night he lost another tooth. He let me know he lost it, holding it up so we could place it under his pillow. I took a deep breath, and finally revealed the truth.

“Sweetheart, I’m the Tooth Fairy,” I told him. His eyes got really big. I thought that maybe I had scarred him by telling him these lies, admitting now that none of it was true. But he grinned really big.

“I can’t believe my mom is the Tooth Fairy!” he exclaimed. “How do you get to everyone’s house in one night?” he asked.

All right, I admit it. I let him believe it for just a few seconds more. And then I broke it to him that not only was his mom NOT the actual Tooth Fairy, but the Tooth Fairy didn’t exist at all.

Of course, this led to questions about the Easter Bunny, and then, sigh, Santa Claus. In one conversation, I crushed his whole entire childhood, making him question every single thing I’d ever told him.

Not really. Truth is, my kid took it in stride. I think he’d stopped believing a while before, and was just afraid to let me know. I’d also been afraid there would be less magic around the holidays without Santa and friends. But that wasn’t the case, either. We made our own magic with each special celebration, building on our own traditions and rituals instead of relying on imaginary beings.

With Easter just around the corner for those who celebrate, I wonder how many of you have grappled with the same thing. Is it wrong to encourage belief in holiday characters like the Easter bunny, Santa, and every other imaginary holiday creature? Is it stripping your kids of childhood magic if you don’t encourage belief? And if your kid does believe, what are some of the special things you do to keep the magic going?

Crissi Langwell is a Petaluma local, blended family mom to three young adults, and author of a bunch of books. Visit her author website at crissilangwell.com.